Recently I was at a security conference for Palo Alto networks in Vegas,
Since I was in security mode, I was sniffing around the wi-fi and hotel network.
What I discovered was shocking , quite simple actually if you think about it.
But i guess that sometimes we are too trusting.

1- there was no network segmentation in the hotel wi-fi
From my wireless connection I could see all wired and wireless computers, in one large subnet.
2- fooling the wifi was also easy, spoofing a MAC address of a paid user and woola Internet
3- I immediately made sure my firewall was on, as anyone in the network could attack my Mac
4- did a simple port scan on their proxy server, running squid with authentication services for the hotspot
5- tried a little man in the middle , and pcs started to route their traffic trough my laptop
6- obviously this was only done for a few seconds not as to disrupt users, just to prove a point.
7- just a tip, if you guys are in public wifi spots make sure that your firewall and av’s are updated as anyone in the area can attack your machine and look for vulnerabilities.
8- be careful when trusting unknown networks, you never know who is listening, with wire shark I could see loads of traffic flowing trough the network.

Some tips below from various scans with a mobile app, from different conferences and open networks. Just so you get an idea of what’s out there 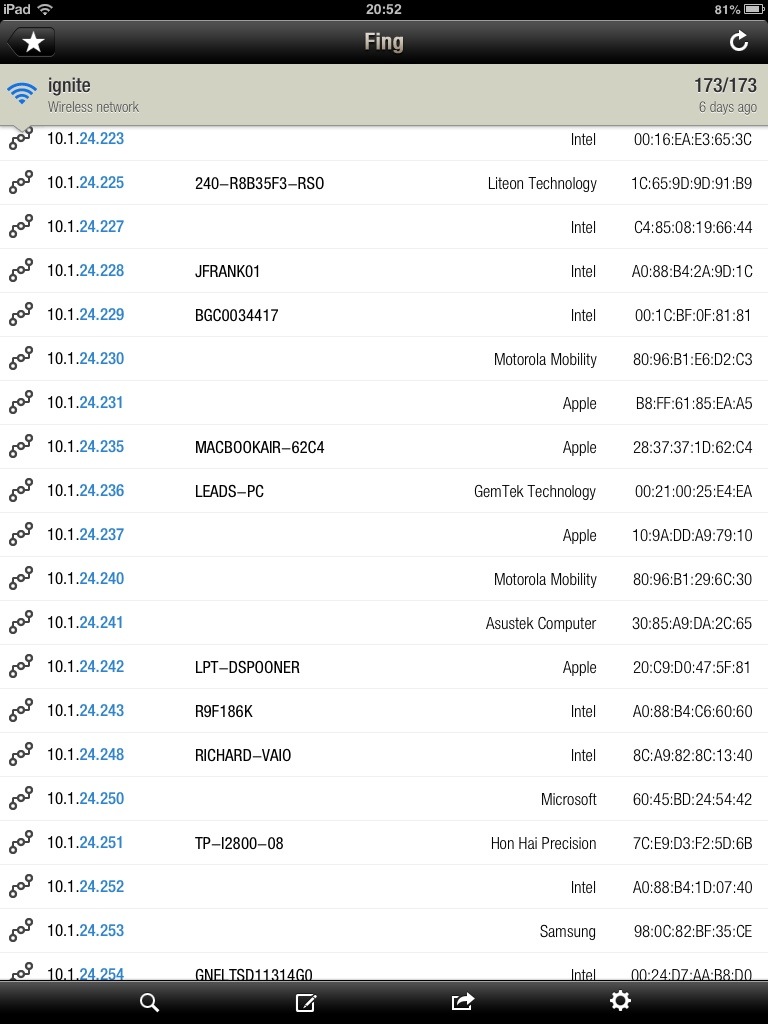 For data security reasons that’s all I can post as I didn’t save or look at any data from users, however this could be very easy to obtain if someone has malicious intent.

Be careful guys protect your data! 🙂 ensure, your firewalls are on, your OS is updated and also your applications, you never know who is snooping around!
Remember you don’t only need to protect your network, a computer out of the office is a great target and potential to get into the office network trough a back door,

If you need any tips don’t hesitate to get back to me, and no don’t ask for,hacking tips I can’t help you with that 🙂